April 30 8 PM Read All About it and the MPACK Band! https://gregoryburrusproductions.com/event/mpack-live-at-south-valley-bbq-and-lounge/

We have had some absolutely fabulous Jazzy Nights Events this year and one the bands that’s become a favorite and will be returning often is the MPACK band.

MPack brings an explosive energy to the stage, guaranteed to rock the house all night long! MPack is a band, a brand, and a musical production enterprise, consisting of multiple elements in an ever evolving flow. It is the musical brainchild of bassist, guitarist, keyboardist, drummer and vocalist Clarence Conover ‘Groove Master’ Conover.

This cross-genre musician is creatively talented and he has gathered other like minded musicians and vocalists that will join Clarence on this occasion:

Thankfully we can go back inside and this year as Jazzy Nights is happy to present MPack Music Live at South Valley BBQ & Lounge. Here’s an introduction to the band because this years’ jazzy night repeat performance will have our favorite musicians returning plus a few of Clarence’s friends. We also list a few performances so you can get a feel of why you should come on out.

Clarence Conover, also known as the ‘Groove Master’, is a bandleader, bassist, guitarist, keyboardist, drummer and vocalist. Clarence founded M-Pack Music productions over 4 decades ago with the motto “Life Changing Sounds”. Clarence has performed and recorded with Patti Labelle, Teddy Pendergrass, Grover Washington Jr., The Delfonics, Bo Diddley and more. Clarence is currently performing at numerous venues across the Tri-State area such as Morris Museum, South Orange Performing Arts Center, South Valley Lounge, Jazz On Sloan, S.O. Crossroads, and is a highly requested performer at many NJ towns annual live music outdoor series. When he’s not on stage, he’s in the studio devising new music for his fans. And here’s a taste from our last event so you can enjoy it.

https://youtu.be/Qibs6a0e3jk
Vocalist  Clarence Conover leads When Somebody Loves You Back (Original Song by Teddy Pendergrass)

Patricia Walton – Born in Germany, raised in New York and currently residing in New Jersey, Patricia has been singing since she can remember.  Her singing career started in school choir, while still in Germany.  She was a soloist and member of the Mt. Sinai UCC choir, a member of One Accord, and as a lead vocalist for several party/dance bands and has performed at various venues in New York, New Jersey and Pennsylvania. Currently she performs both as a Solo Jazz singer and is featured artist in Jazz, Blues and R&B Band as the lead vocalist of MPack! Her warm voice is sure to put a smile on your face and set your feet tapping!

Lynette Sheard is a gifted versatile vocalist with a five octave range. She is an actor, producer and director. She is the unseated “West Orange Idol”. Her performances have been acknowledged in numerous publications including, NY Times, The Record and the Chronicle. The Star Ledger proclaims that “Her voice reaches deep into one’s soul and finds a soft spot” She performs Jazz, R&B, Gospel, Soul and Pop music throughout the tri-state area. From our last event here’s Lynette Sheard leading on Rufus & Chaka Khan – Sweet Thing. –
https://youtu.be/hjJ9IB_UzHc

Larry Greenberg – Multi-keyboardist and synthesist, composer/arranger, bandleader, and studio musician performs in multiple genres of Funk, Jazz, Jazz Fusion, R&B and Latin Rock. A ‪former Skyy band member “Call Me” topped Billboard’s R&B chart and was No. 26 on the pop side. Larry is a regular on the New Jersey live music scene and has performed in many local venues at the Morris Museum, South Orange Performing Arts Center, Roxy and Dukes, Crossroads and more.

Kev Moore is a Jersey boy through and through. He’s been making music since he was a teenager, and his drum performances have won him fans all over the Garden State. This Master Drum from East Orange High School has performed in numerous venues across the industry, was part of the popular Band Aurra – Interviewed by Don Cornelius and has performed on the cutting edge of music, dance and culture Nationwide TV Show “Soul Train”. Kev Moore is a local musician who has performed in many venues throughout New Jersey. Kev loves playing drums and interacting with audiences, and he always gets the crowd involved in the show. He has performed regularly at the Morris Museum, South Orange Performing Arts Center, Roxy and Dukes, Crossroads, and many other local spots.   Here’s a taste of Kev Natz Moore in action.
https://youtu.be/_WZmfDyzczw

Brett Calder – This veteran soulful  guitarist list a Guitar Center Hero, a regular performer around Northern NJ venues such as The Vintage Edge Wine bar,  Jazz in the Loft at South Orange Performing Arts Center, the South Orange Village Juneteenth Events along with regular performances Downtown After Sundown and at the memorable Roxy and Dukes. Along with being in MPAC Brett, performing in Harlem Nights fundraiser and is also a member of the very cool The Groove Syndicate band.

As you can see the musicians are heavy hitters playing across many venues throughout the Tristate and beyond..

Take a listen above and note folks were singing along, sitting dancing, talking with friends, eating and just enjoying the moment all night long.  The last sold out Jazzy Nights event was packed at the beginning and full throughout the night and just like last year folks came to enjoy themselves. Inside we will be in the blue room of South Valley BBQ and Bar under new ownership so come find us. 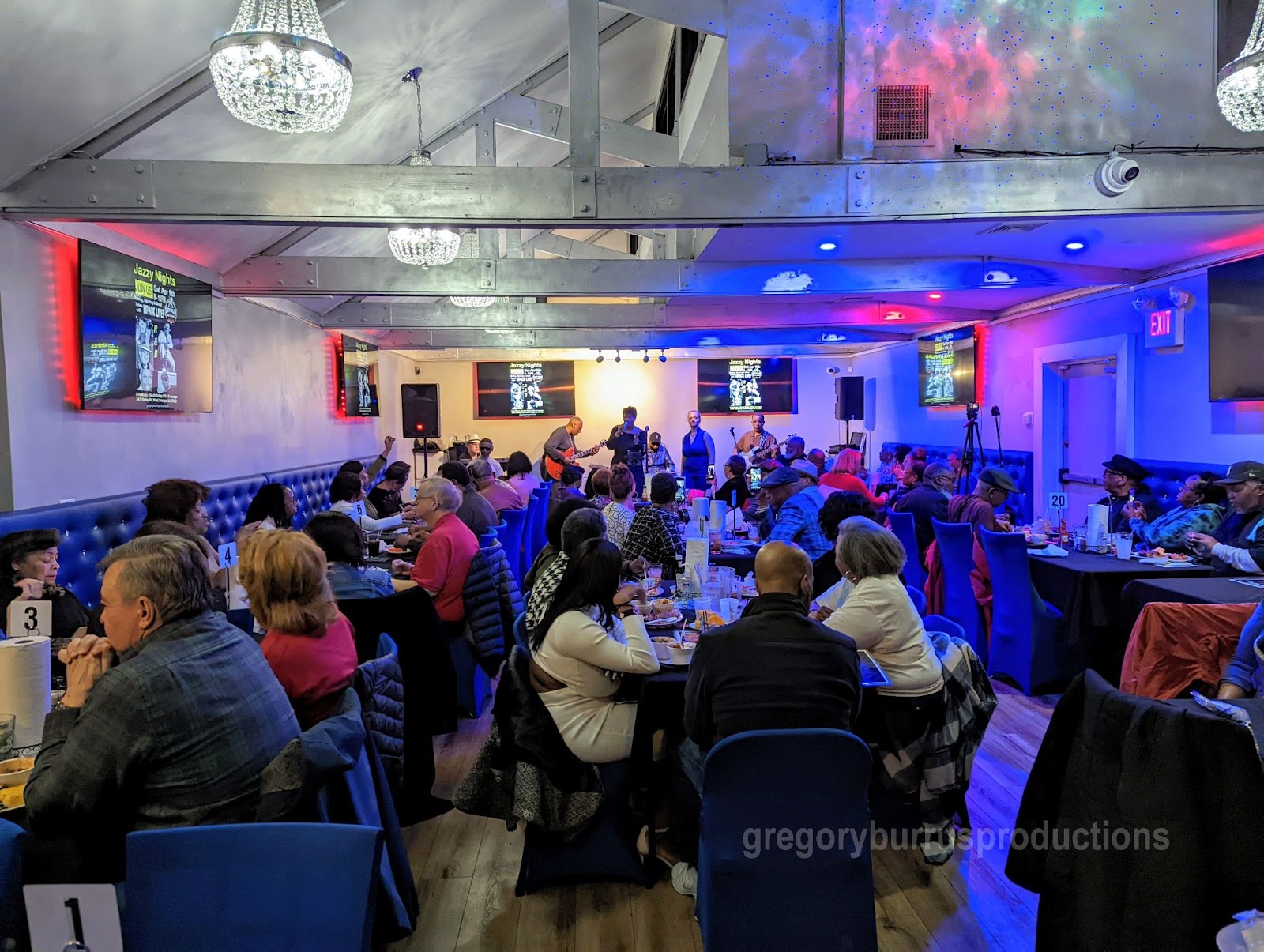 We are going to have a number of events as we move forward including one this Sat April 30. Read more: https://gregoryburrusproductions.com/events/  and https://www.facebook.com/jazzynightslive

About the Writer Gregory Burrus

In addition to producing events, Gregory Burrus Productions also showcases, photographs, videotapes events annually such as the annual NYC John Jay College Friends of Myrna Bain Scholarship Fundraiser, the Orange NJ Farmers Market, numerous local bands at various local venues.
Gregory Burrus has a passion for making live music happen anywhere and everywhere he can whether locally around town or around the world while living life every day to the fullest.